If you liked Guns Akimbo, which we’re guessing you did because you are here, then you must enjoy the basis of the media or an outside observer glorifying and broadcasting violence/killing. It’s actually a pretty crazy thing to think about and can be quite terrifying if you think about something like this actually happening to you. Though it would be a horrific experience in real life, it’s an incredibly fun experience to enjoy on our big screens, since these movies are usually filled with amazing hyper-realistic violence.

All these things combined along with a good cast makes this and movies like Guns Akimbo so fun to watch. Because of this, we have gathered a list of what we believe are the best and most similar movies to Guns Akimbo that will provide you with the utmost entertainment. You’ll find some amazing movies on this list which will captivate you for hours on end. Just keep on scrolling to see what incredible films we have in store for you today!

Starting off our list of movies like Guns Akimbo, it’s only right that we start with one of the largest franchises that revolve around the media glorifying killing and violence. Everyone knows The Hunger Games, and if for some reason you don’t, you need to give it a watch.

The Capitol of Panem continues to maintain its tyranny over 12 districts by holding the Hunger Games every year. Each district is forced to select a boy and a girl as tributes to compete in the nationally broadcasted fight to the death. Everyone must watch until only one tribute remains. Katniss Everdeen (Jennifer Lawrence) is District 12’s tribute and must rely on her hunting skills and instincts if she wants a chance of survival. If she wins, she may be the spark of hope everyone has needed for quite some time.

This movie is ridiculously gory and gross at times. It’ll most likely give you bloody nightmares after watching it. Just imagine being trapped in a building and being forced to choose people to kill next or else you face death. It’s terrifying!

80 employees have come into work at the Belko Corp thinking it’s just going to be another ordinary day at the office. The day quickly takes a turn for the worse when they all find themselves in a mortifying fight for survival serving as pawns in a sinister game. Trapped inside the building with nowhere to go, the voice over the intercom lets them know they must choose two employees to be killed within 30 minutes or they will suffer the consequences. As ultimatums continue to emerge, those who were once friends become enemies and trust is in shortage. Only those with the strongest wills will be left standing at the end of the day.

In our opinion, this movie is vastly underrated and unknown! This is an epic movie that’s filled with over the top non-stop violence. It’s very much like Guns Akimbo as well. If you haven’t seen it, we highly recommend it!

Kable (Gerard Butler) is an inmate on death row who must fight his fellow inmates in a gruesome online video game called Slayers. Every one of his movements is controlled by the controller of a young gamer he has never met. Kable and all the other inmates in the game are nothing more than simulated characters to the gamers who don’t know better. But in reality, Kable is an important piece to the resistance group which is trying to take down the game’s inventor and stop him from continuing the high-tech slavery he profits so much from.

A race to the death with cars that are loaded with huge destructive weapons! Come on, it doesn’t get better than this! And it has Jason Statham in it, so you know it’s going to be filled to the brim with bone-crunching action.

Jensen Ames (Jason Statham) is a three-time speedway champ who finds himself serving time in Terminal Island, the cruelest prison in the country. He has been framed for a murder which he did not commit. It appears he’ll never see the light of day again until he is offered an uncanny road to freedom. He must compete in the Death Race as a driver who goes by the name Frankenstein, or he can simply sit and perish in his cell for the rest of his life. The car he will drive is equipped with a plethora of grenade launchers and flamethrowers. He might as well die with the chance of freedom rather than die years later doing nothing.

We can all use some more Statham in our lives. So go ahead and check out our list of all the Best Jason Statham Movies You Must Watch.

So this one doesn’t necessarily have the media glorifying violence aspect, but it’s very similar to Guns Akimbo due to the type of violence and how it looks. It has that fun hyper-realistic violence we all know and love! Definitely give this a watch if you haven’t seen it.

Mike Howell (Jesse Eisenberg) is a big stoner in a small town who spends his days smoking and writing novels about a superhero monkey. Mike has a secret that even he doesn’t know. He has been trained by the CIA to become a lethal killer. The agency has decided to mark him for termination. But before they can get the job done, Mike’s old handler activates his dormant skills, which turns him from a lazy stoner to a stone-cold killer. While still in shock after discovering these skills, Mike must use them to save him and his girlfriend from getting killed.

Next up we have a movie literally based on how the media portrays criminals. It’s an awesome movie that follows two famous serial killers as they go around the country on a killing spree! What more could you want!?

Mickey Knox (Woody Harrelson), a delivery boy, ends up falling in love with Mallory Wilson (Juliette Lewis) after helping her kill her abusive father. The two end up going on a road trip where every time they make a stop they kill everyone around them except for one single person so that they can live to tell the story. They quickly become extraordinarily famous due to the sensationalized reporting surrounding the two serial killer lovers. The press continues to cover the couple as they go on a 52 person killing spree. 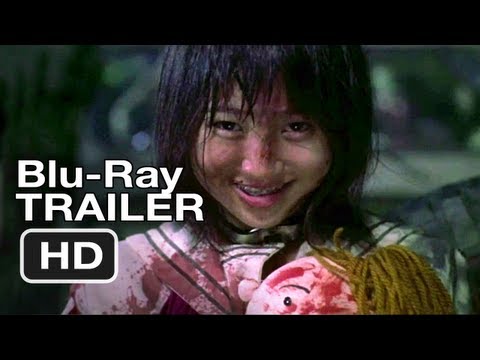 Ending our list of movies like Guns Akimbo, we have a bunch of kids having to fight to the death! You would never want to find yourself in a situation like this, let alone as a ninth grader! If you haven’t seen this one, you should go ahead and change that now!

A total of forty-two 9th graders are sent to a small deserted island. While there, they are given nothing but a map, some food, and multiple weapons. Each one of them wears a collar around their neck that contains an explosive within it. If any of them breaks a rule, their collar is set to explode. They have one mission and that’s to kill each other until only one is left standing. Whoever is left standing at the end will be let off the island alive. However, if there are multiple people still standing, then the collars will be set off killing them all.